As we discuss the power that gets to your house, it is important to mention polarity. If you look at any flashlight battery you will see a (+) on one end and a (-) on the other.
What exactly does that mean?

In batteries, electricity is made from a chemical reaction. Electricity always flows from
(-) negative to (+) positive. In a flashlight the current flows from the negative terminal and into the positive terminal where it is neutralized. This is how the “juice” in a battery is depleted.

But have you noticed that most flashlights take 2 batteries and they have to be installed in just the right direction? Why is that? In order to understand that, we need to mention parallel and series circuits.

I have used flashlight batteries for our illustrations. They are 1.5 volts, and I am assuming they have one amp of current available for demonstration purposes. The batteries in a flashlight are configured into a series circuit. Notice the configuration:

In a DC (direct current) series circuit, the power is wired negative to positive and positive to negative. In this way, the voltage is doubled and the amount of current (from the batteries) remains the same.

The current goes from the negative end of the bottom battery and through the element of the light bulb. Then from the bulb it goes into the positive terminal of the top battery as it is used.

We won’t go into AC (alternating current) series circuits, as you will not be encountering them in simple home projects.

Next we have a parallel circuit below:

In a DC (direct current) parallel circuit, the negatives are wired to each other as are the positives. The voltage stays the same, but the available current is doubled.

The current flows from the blue and through the bulb element. Then from the bulb it goes to the red, where it is neutralized.

Here is an illustration of what happens inside the bulb as the
current flows: 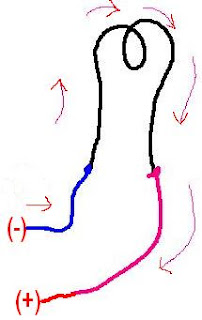 You will be encountering AC (alternating current) parallel circuits in your home. There is no true negative or positive as the current continually alternates, but the idea is the same.

If someone accidentally used the wrong colored wire, you could be in trouble. This usually does not happen. But if you live in an old house it would be worth checking them first. We will cover, checking power a little later.

Next we need to get to the power that is entering your house from the electric meter.
Posted by Sam Lemon at 11:42 PM

Sam Lemon
I appear to this one and that one